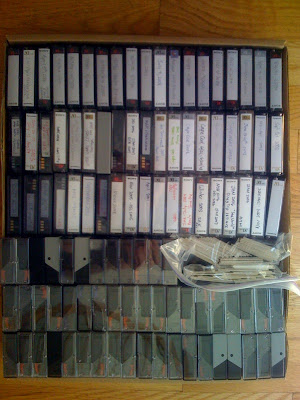 This morning I wrapped up my MiniDV tape capture project. I false
started on Pinnacle Studio prior to 2008 because of the general
instability, poorly scaleable storage strategy, and general lack of
personal satisfaction in being able to do anything with the gigs of
AVIs.

With iPhone, Apple TV, YouTube and 15/15 Mbit pipe and public/private
web resources, wireless...my video is where I want it when I want it.

I restarted my efforts the weekend I installed Mac OS X Leopard in
February on my MacBook Pro Intel 4GB with 17" screen. While I was in
King of Prussia at the Apple Store buying Leopard, I grabbed a 1TB
Western Digital Home Edition drive at Costco. Since then I got a total
of 4 drives, two for backups. The prices started at $279 and came down
to $229. One grand for 4TB of storage, quiet as a mouse, and take up
as much space as a six-pack of beer.

I used iMovie 2008. It was a champ. Absolutely great program. Along
the way we even took some time to create some YouTube videos

Battle of the Hoth Force
(trailer)

Has 12,000 views in 3 months and is upwards 2.0 on popularity
according to YouTube InSight.

In iMovie we have almost 1000 video events over nine years. I got the
Sony TRV 900 from a video production consultant in Florida on eBay for
$1800 and he only had used it for some cut-ins on one job. I mostly
used it with a high performance wide-angle 52mm lens and sometimes
used the 9m underwater housing sledding, snorkeling and in pools waves
and rain.

During capture something wore out on the camera. I was getting frame
drops and chirps. I had to send it out and it received a new head back
in April. Pretty much okay after that.

The MacBook would get pretty warm, especially during LP 90 minute
captures. I kept a Targus dual cooling fan USB powered pad underneath
and this helped. I had a few SP 90 minute tapes from Panasonic and LP
recordings on those were going beyond two hours and over 25GB. The
MacBook froze on two occasions and iMovie core'd fairly often after
capturing more than three tapes in a row. After the iMovie and Mac
OS updates in May and June I never had problems since.

My strategy for naming events was

It probably takes about 15-20 minutes per hour of video to organize:
splitting events, renaming, cleaning up 1 second clips which often
come from the capture and realize tinestamps of TODAY. The
organization of events in iMovie is very helpful. The is one bear trap
however. You cannot select a disk or year node in the event tree
without causing that entire scope of video thumbnails to display -
kill iMovie wait a long while.

A regretable shortcoming of my technique was lack of cross referencing
back to tape. I should have labelled tapes 001-1xx and kept this
value in the event name.

I am going to turn my attention back to Nikon Super Coolscan 5000 and
what is probably tens of thousands of negatives and slides to scan.
Since Tara and I mistakenly threw away our negative box from 1988-1997
I have a ton of photos to scan on the Epson. I am hunting for my 1080p
HD camera solution.

Hopefully we can knock out some videos each couple of weeks. Here is a
list of some special events I want to get to:

Marrying Tara at Villanova in 1994

Birth of Matthew, Jack and Jillian

Presenting with James Gosling at JavaOne 2004

Comcast Interactive Media had a visitor today. I work with a great team who implements the Comcast.net portal and Fancast. I introduced our visitor to the technical community in a town hall meeting in CIM City.

"In the context of web technology how many folks have heard of TAXI?" (perhaps one person)

"How many people have heard of AJAX?" (everyone)

"A couple of years ago I was working on AJAX application architectures and JavaScript debuggers with another Sun Senior Staff Engnineer, Roberto Chinnici (Java web services lead), and I asked him whether he subscribed to this distributed MVC implementation pattern which was cropping up or a more RESTful decoupled approach. Roberto indicated the latter because his design center was 'TAXI'. He referred me to 2001 article defining TAXI."

"The foundation of strong software/systems engineering is proven architectural patterns and style. However, prior to the arrival of these patterns comes thought leadership."

"If you want to be the best engineer you can be, discover who the thought leaders are. Subscribe to their philosophy (their thinking) and most importantly resemble them. The best way to resemble thought leaders is the know them. Make it a goal to meet him or her, go to a conference or business and get connected. Question them."

"Many of you know that I promote REST style architecture and assert ATOM as our design center for read+Write web resources; I recommend systems like GData as strong examples that our implementations resemble. What you may not know that I try hard to resemble Tim Bray."

"I am happy to introduce Tim Bray, Director of Web Technology at Sun Microsystems. Tim will lead a discussion on current trends in network computing. Welcome Tim!"