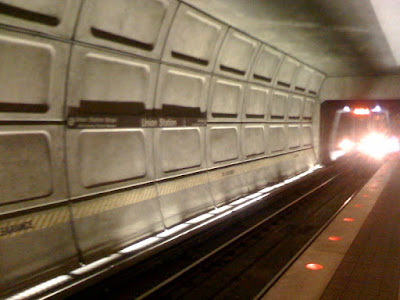 When I get a chance to tag this entry it will be not far from the truth. Right off the early Amtrak into Union Station, I tried to move swiftly through the Metro station. I was heading over to the
Marriott Metro Center to attend Splunk Live! I purchased a One Day Metro Pass with a credit card which immediately f'd me in the turnstyle - "see station manager". Apparently, the "one day pass" only works after 09:30. WTF kind of day epoch is that? Actually, I will need another tag ...

I bought a second $2 Fare Card and finally got along.

How ironic that on my way to a Splunk technology briefing, , on my way to talk with experts who understand time epochs better than most, that a mis-apportioned time epoch screws me out of
eight bucks and 10 minutes.

There was a day, when I literally wore a bat belt for iPlanet (i.e. two SkyTel text pagers), that I was fed up with the virtual ( ha ha ) slap in the face of operational awareness by the Java VM engineers. If the paucity of information in the GC logging was bad enough, there was no time stamp in the GC log messages. If you system traced the VM more time() system calls would fly by than you could shake a stick at and these guys weren't generous enough to drop a LONG into a printf().

I asked for a timestamp. I bitched for a time stamp. About as much time went by as there were VMs signaled SIGQUIT. One day on my way to gaining weight

I left the Java DriveThru with my

and ... Huh? WTF? These guys don't print a UTC time stamp, they don't print a formatted time value. They print an unconventional duration since the epoch of the VM/GC runtime start. I guess if you live in a virtual world the epoch of the VM start means something (look everyone! The VM ran for 87,000 seconds!). In the real world it is almost worthless. When the rest of the real world treats time as a standard you might as well live in The Black Sun if you devise
your own time epochs.