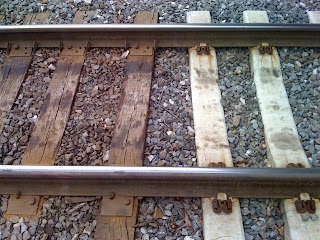 I just noticed this morning wait for the 8:04 R5 inbound this
interesting juxtaposition of new and old and it was thought provoking.
Could have been the caffeine too - in either case I think other
commuters thought it a little weird that I was taking a picture of the
tracks.

What this picture shows is the very end of the new track installed by
Amtrak along the Mainline. You look East and you see the modern
concrete railroad ties and to the West you see the old wooden ties.

All day long I can't get the imagery out of my head. It seems like a
stark change yet I didn't notice it for a month. If you are seeing the
ties you see a difference. If you focus on the rail you see just a
uniform feature. I just noticed as I type this that the balast looks
different to the West - stained by preserative on the ties.

When do you change infrastructure?

When do you change the implemention details?

Can you make the change at one layer while preserving certain existing
function?

What is the cost and value of the infrastructure change?